ACE OCP is a plugin for the CSi products (SAP2000® and ETABS®), representing an advanced real-world optimum design computing platform for civil structural systems. In order to be applicable in the everyday practice, it is implemented within an innovative computing framework, founded on the current state of the art of optimization. It covers all construction materials that CSi products support such as reinforced concrete, steel, aluminium etc. 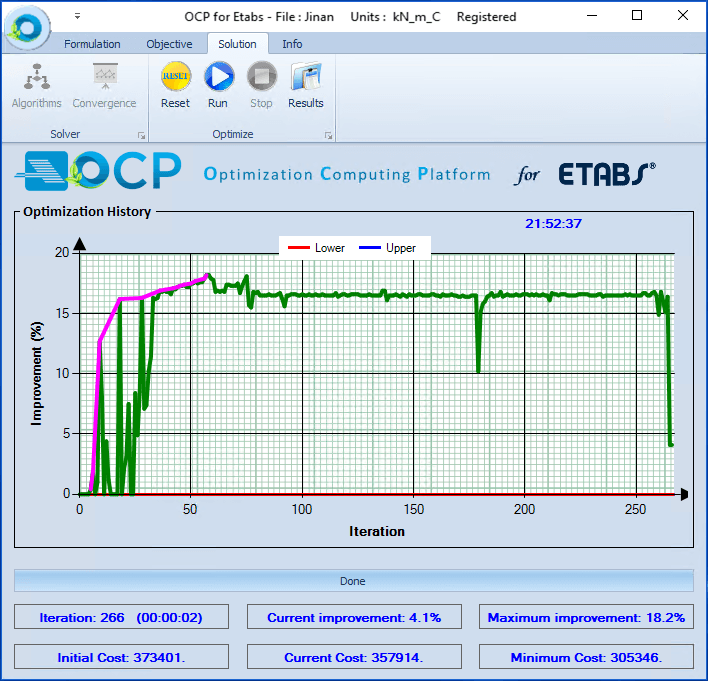 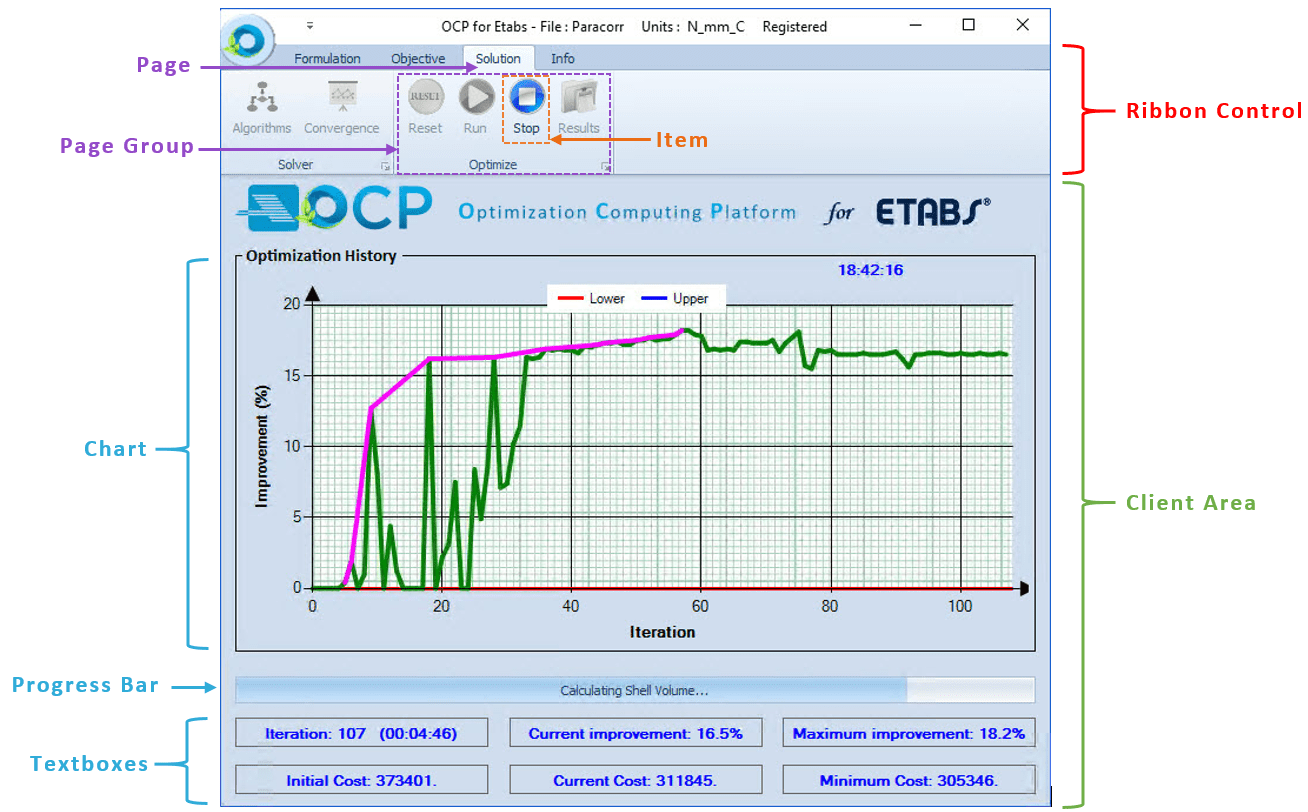 Structural optimization has matured from a narrow academic discipline, where researchers focused on the optimum design of small-idealized structural components and systems, to become the basis in modern design of complex structural systems. Some software applications in recent years have made these tools accessible to professional engineers, decision-makers and students outside the structural optimization research community. These software applications, mainly focused on aerospace, aeronautical, mechanical and naval structural systems, have incorporated the optimization component primarily as an additional feature of the finite element software package. However, these tools fall short of meeting the needs of the professional engineer. ACE OCP was developed in order to fill this gap by offering a holistic optimization approach in terms of final design stage for real-world civil engineering structures such as buildings, bridges or more complex civil engineering structures.

Optimization is the act of obtaining the best result under given circumstances. In design, construction, and maintenance of any engineering system, engineers have to take many technological and managerial decisions at several stages. The ultimate goal of all such decisions is either to minimize the effort required or to maximize the desired benefit. Among others, using ACE OCP, material cost reduction can be achieved. 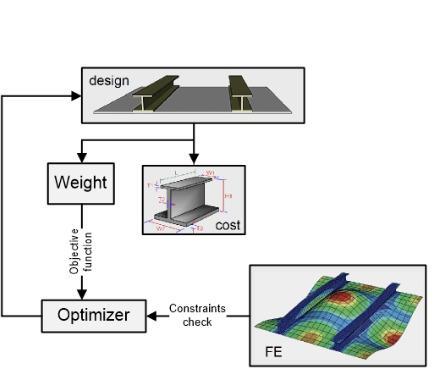 Optimization is the act of obtaining the best result under given circumstances. In design, construction, and maintenance of any engineering system, engineers have to take many technological and managerial decisions at several stages. The ultimate goal of all such decisions is either to minimize the effort required or to maximize the desired benefit. Among others, using ACE OCP, construction and material cost reduction can be achieved. 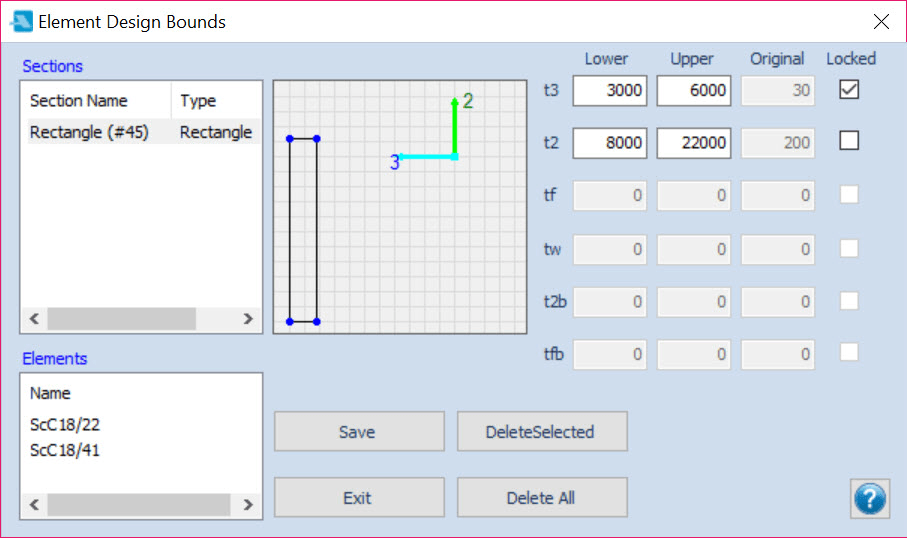 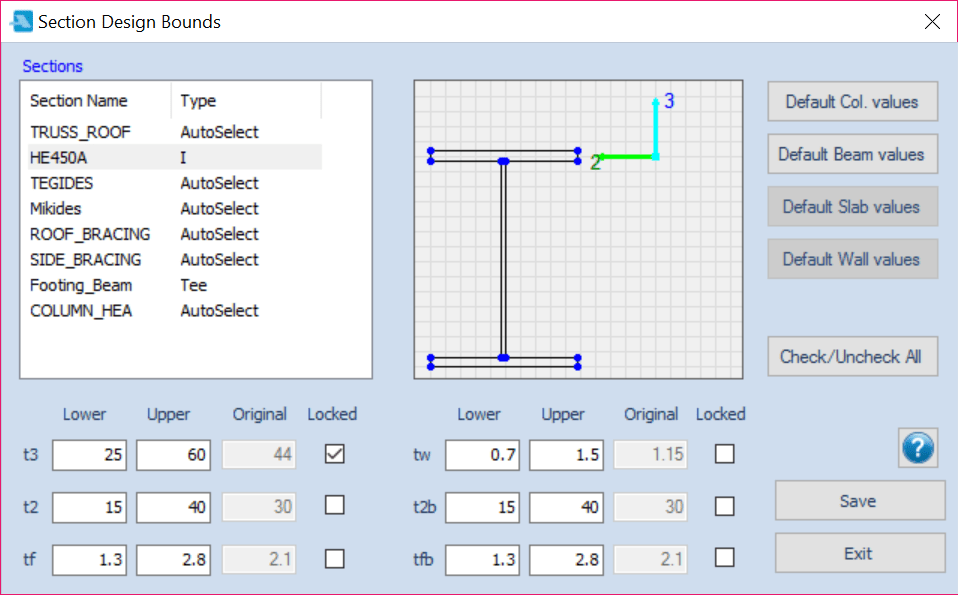 Benefits (Why should you use ACE OCP?)

Engineers always strive to design efficient structural systems which must be as economic as possible yet strong enough to withstand the most demanding functional requirements arising during their service life. The traditional trial-and-error design approach is not sufficient to determine economical designs satisfying also the safety criteria. Structural design optimization, on the other hand, provides a numerical procedure that can replace the traditional design approach with an automated one. ACE OCP plugin provides a complete optimization approach in terms of final design stage for real-world civil engineering structures such as buildings, bridges or more complex civil engineering structures.

The scientific and technical opportunities adopting ACE OCP plugin in the design practice are enormous, but so are the issues at stake. The main goal for the implementation of ACE OCP plugin is to help new generations of engineers to design safer and economic structures within an affordable and reliable technological framework.

ACE OCP’s strength lies in the broad range of built-in capabilities and ease of use. For the first time a plugin ensures a bright future for optimization methods and their use into the mainstream of structural engineering practice.

Within the construction industry, there is constant pressure to deliver projects more effectively on multiple fronts. This is most notable in the desire to reduce project time scales, while also consistently increasing capability and design quality. ACE OCP brings significant added value to the users of SAP2000® and ETABS® and an instant payback.

There is no need for additional information. In order to ensure that the results obtained using the ACE OCP plugin are, directly, comparable with those implemented in the initial model by the user, the same FE simulation, material properties, loading conditions and design codes are considered for the repeated procedures of analysis and design. This is implemented by using the same binary input file (SDB or EDB file) in the application of ACE OCP plugin for the generation of the new models.

Design optimization refers to the process of generating improved designs in terms of cost, manufacturability or performance without compromising safety. Structural optimization problems are characterized by various objective and constraint functions that are generally non-linear functions of the design variables. ACE OCP supports various objective functions.

The implementation of optimum design formulations to real-world problems requires significant computational effort which can only be addressed with the synergy of cutting edge technologies in the field. Therefore, the tools required for dealing with structural optimization problems basically must serve four purposes:

(i) accurate numerical modelling of the structural system,

ACE OCP is the result of over 20-years of Research and Development including practical experience in developing a general-purpose code for structural analysis and design optimization in the form of a modular standalone code, incorporating key contributions from the prestigious Institute of Structural Analysis and Antiseismic Research of National Technical University of Athens (NTUA).

. The methodologies integrated into ACE OCP plugin have been approved with the publication of the theoretical framework and indicative results in the official Journal of the International Society for Structural and Multidisciplinary Optimization (ISSMO).

ACE OCP is based on the next generation computational procedures and the implementation of such computing tools is expected to have a profound impact in optimized design of structural systems, leading to revolutionary changes in civil engineering design practice. Effectively, it makes value engineering available to every professional engineer.

ACE OCP has been tested exhaustively in a variety of real-world structural systems leading to cost reduction of up to 30%. Indicative results have been published in the most famous and prestigious journal for applied optimization. Among others it was tested to further optimize Beijing’s National Stadium (Bird’s Nest) and National Aquatics Centre (Water Cube) where ACE OCP produced amazing design improvements saving an additional 10% in materials 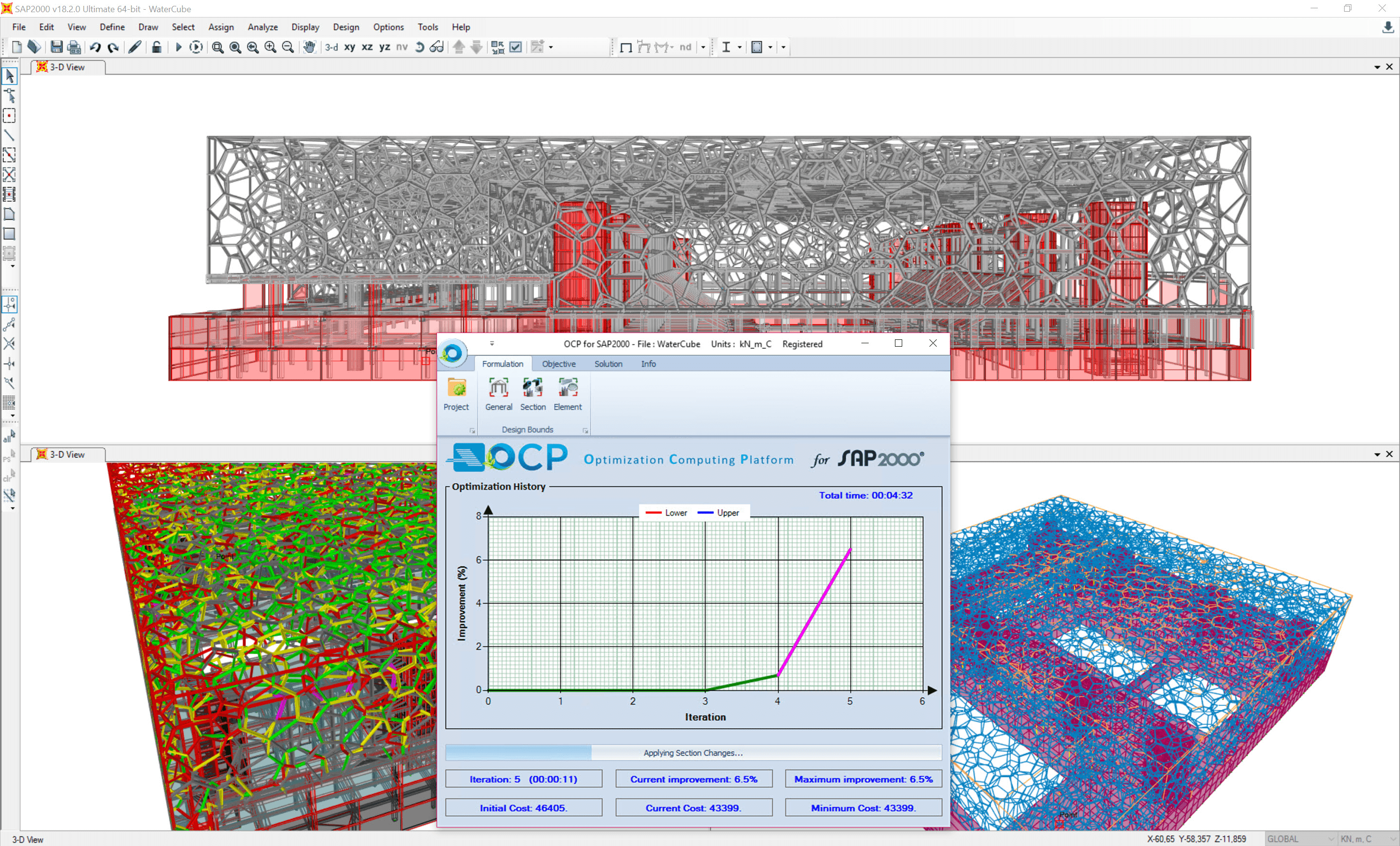 Three-dimensional structure of structural steel and reinforced concrete material composed of a  steel space frame, in the form of  the ‘cube’ with bubbles and a shera wall structural system in the lower elevations.

It is a structural model of the Beijing National Aquatics Center, also known as the Water Cube. The structure consists of 24,905 frame elements and 8,653 surface finite elements.

Regarding the formulation of the optimization problem, a number of groups with cross-sections were defined with the corresponding design variables;

a) 15 groups with four design variables of steel frames,

c) 4 groups with one design variable of concrete frame elements, and

d) 13 groups with one design variable of surface finite elements (one group of slabs and 12 groups of shear walls). 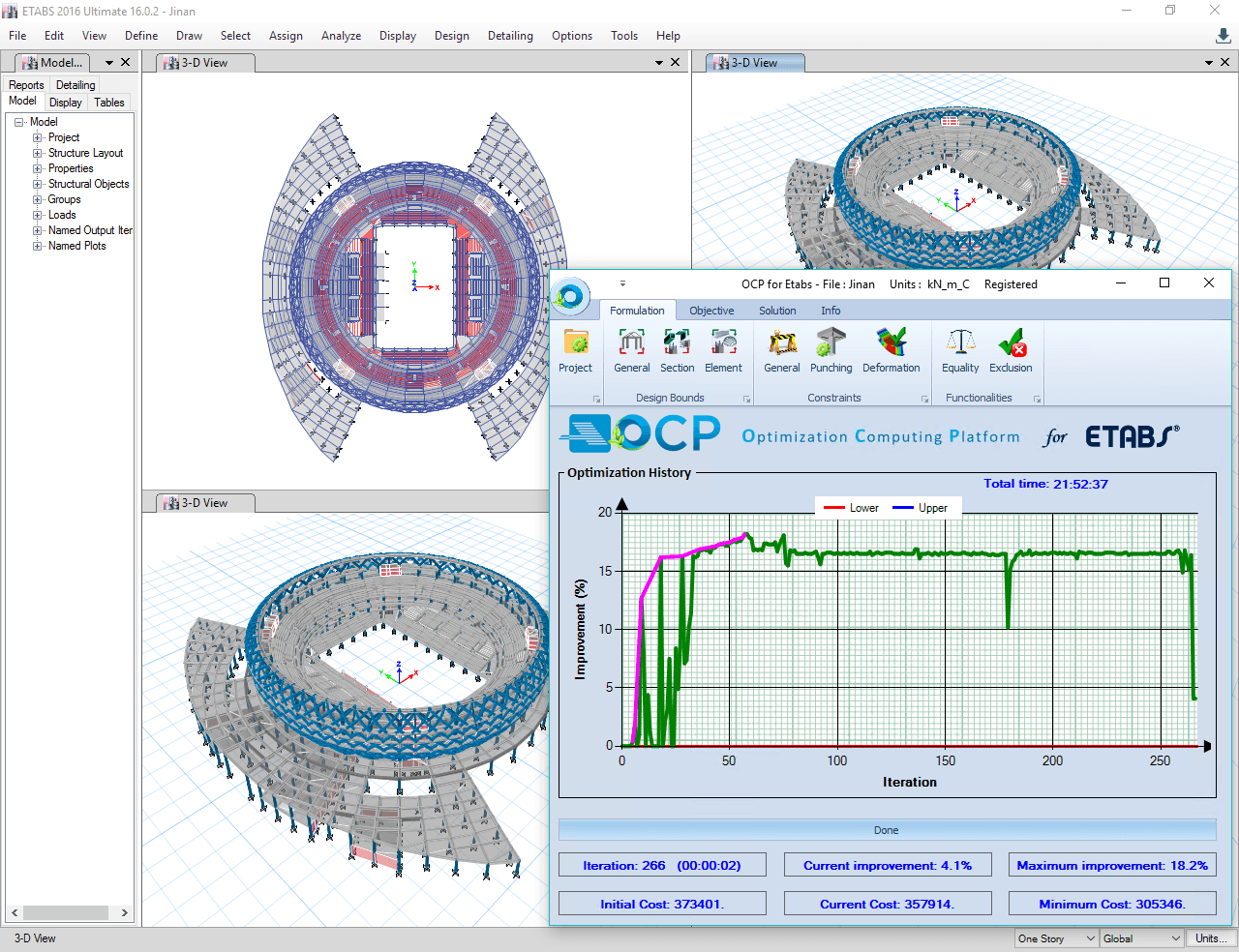 ACE OCP is not a standalone product!

You need to have a valid and working license of CSI’s SAP 2000 v18, SAP 2000 v19 or ETABS 2000 – 64-bit version ONLY.
There are different ACE OCP versions for each of the versions mentioned above.
If you have 32-bit version of SAP2000 or ETABS installed you can download from CSI the 64-bit version.

For copy protection and licensing reasons an always-on internet connection is required when running ACE OCP!